1. Volatility of the oil & gas industry over the past decade

The global lockdown in response to the COVID-19 pandemic has pushed an already-volatile oil & gas market into crisis. On the one hand, the oil & gas industry is already in a major period of transition, with mounting pressure for society to be less reliant on oil and gas in the face of climate change, which has led some companies to diversify into the renewable energy sector. On the other hand, competition for market share within the industry remains fierce, as evidenced by the recent price war between OPEC and Russia.

However, the current situation created by COVID-19 is unprecedented, with the pandemic causing a sudden and dramatic reduction in global energy demand – one which is likely to continue for many months to come, if not longer. This has severely exacerbated the existing problem of oversupply and low prices.

Prior to the COVID-19 lockdown: 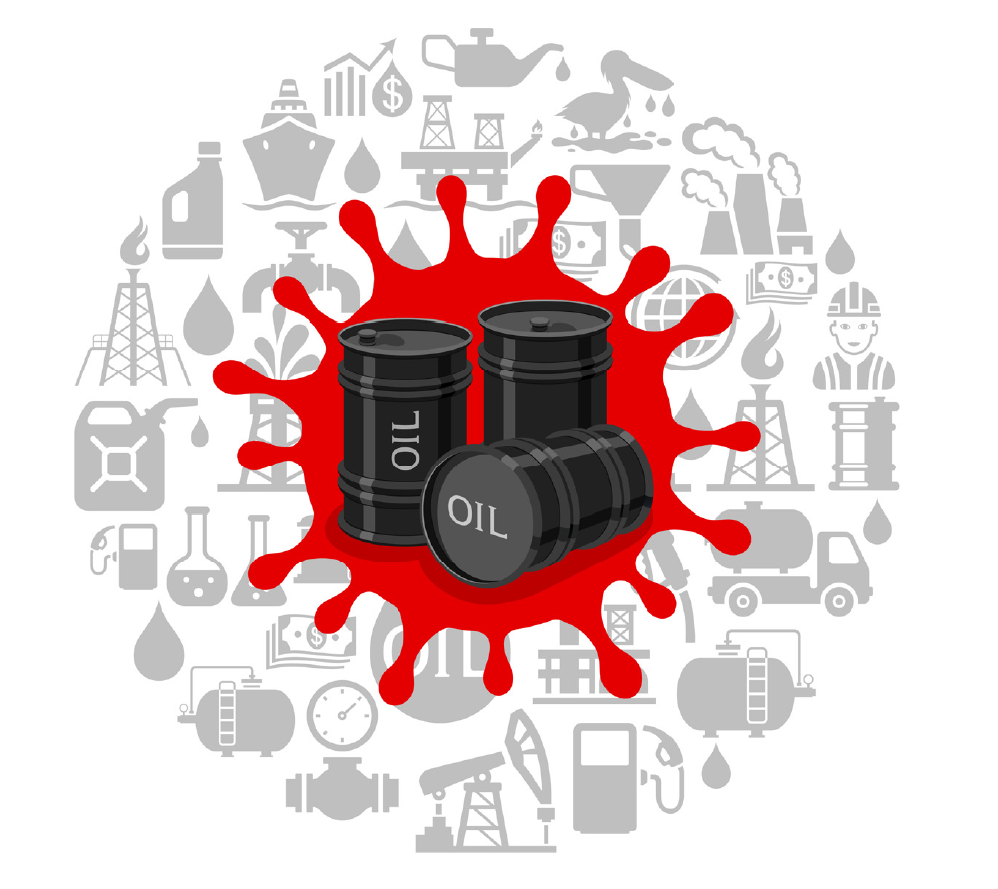 2. Possible scenarios for the oil & gas industry in a post COVID-19 world

With the oil & gas industry currently locked into a negative cycle of oversupply and price drops, the economic downturn created by the COVID-19 crisis will deal a death blow to a significant number of companies. There will be an economic recovery at some point in the future, but it is highly unlikely that the overall global economy will return to pre-COVID-19 “business as usual”, at least not soon. Instead, the oil & gas sector will be forced to confront a substantial reduction in demand due to both lower economic activity and increased pressures to embrace greener, lower-fossil-fuel energy sources.

It seems clear that the impact of COVID-19 will push the oil & gas industry even harder towards an earlier structural transformation, which will result in fewer and more agile players. Even in the best-possible scenario, the petroleum industry will continue to lose appeal to investors and shareholders, as has progressively been the case for the past 10 years.

The likelihood of the scenario “Back to Normal” is relatively low, since it strongly depends on a “V-shape” bounce in the economy, as well as the main oil producers deciding – and being able – to cut production significantly to reduce oversupply.

The scenario of “Stagnation” seems more likely, in which economy and demand impact is “L-shaped”, and supply adjusts over time to support prices in the $30–40Bbl range.

If both the economy and demand bounce after a few months, OPEC and other main producing countries will probably lose the sense of urgency to support prices by cutting supply. In this case the industry will face a “New Normal” scenario, with OPEC once again assuming pre-eminent leadership within the market and oil prices remaining relatively low.

The worst scenario for the industry is “Severe Injury”, with both slow economic/demand recovery and persistence of oversupply. We believe this is less probable than the “Stagnation” and “New Normal” scenarios since a lasting demand drop would motivate OPEC and other producers to adjust supply to support prices after a period of time. The level of “injury” to both individual players and the petroleum industry as a whole will depend on whether OPEC commits to supporting prices or leaves the market to make the economic adjustment to balance supply and demand. 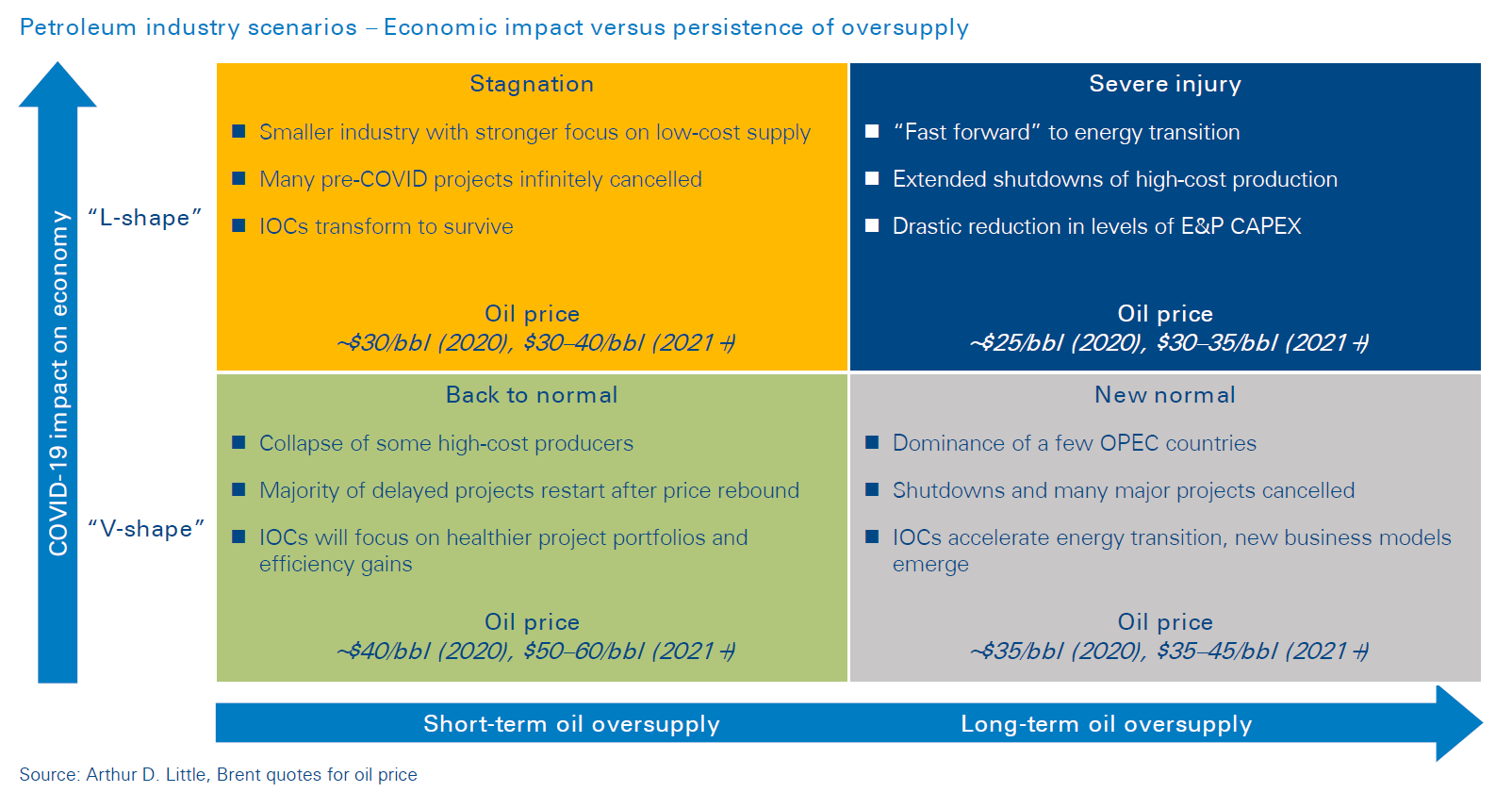 International oil company (IOC) reserves have an average production life of just 10 years, and with exploration for new reserves significantly reduced, their share of production (and market power) will progressively shrink. OPEC has over 50 years’ worth of oil reserves, and combined with generally low production costs, will ultimately displace much IOC market access. However, OPEC countries cannot afford to keep oil prices this low indefinitely: petroleum-based economies will need prices to rise in order to support national budgets and spending programs, or they will risk political instability.

Looking more closely at how the business model of each industry sector will be affected, we predict the following:

Although a significant number of players in the oil & gas sector may lose market share, there are nevertheless opportunities for companies willing and able to transform their business models. In the short term, this may involve consolidation via acquisition of high-quality assets from failed or collapsing companies. However, with traditional oil margins now fatally eroded for many companies, other energy investments should become more attractive.

Oil and gas are not only increasingly unprofitable to find, produce and industrialize, but also finite resources. Climate change is driving a move to a greener, cleaner-energy economy, with government policies driving increased renewables penetration across the globe. As renewable energy use has become more widespread, infrastructure costs have fallen accordingly, encouraged by financial incentives connected with meeting “green targets”. Oil & gas projects now have lower returns and higher levels of uncertainty than ever before; in contrast, renewables continue to have lower technical risks, and also now have potentially lower commercial risk and relatively higher rates of return.

However, there is a possible flipside to this new energy landscape. While the climate for renewables has never been more favorable, fossil fuels may nevertheless remain more competitive in the short term if oil prices stay low. Although both businesses and consumers are keen to use greener energy sources, they may be swayed to stick with oil and/or gas if it becomes (and remains) significantly cheaper. Similarly, governments may prioritize economy recovery over green subsidies and continue to invest in oil- and gas-fuelled power while there is a plentiful, competitively priced supply. The US and Canada will certainly support their oil & gas sectors and try to prevent their collapse.

The COVID-19 lockdown has thrown the issues facing the oil & gas industry into stark relief. However, while the battle over supply, price and market share could be viewed as a crisis of its own making, the industry ultimately understands that, whatever scenario turns out to be correct, peak demand for oil is going to happen soon – due to COVID-19, perhaps sooner than expected. Companies that have already been far-sighted enough to invest in low-cost assets and the energy transition are in the best position to capitalize on this situation, in which a prolonged run on the price of crude looks set to make the traditional oil & gas model much riskier and less commercially attractive than ever before for most players. And with oil & gas much less of a sure bet, investors will be increasingly persuaded to put their money into the renewables sector instead.

Arthur D. Little believes a post-COVID-19 world will see the oil & gas industry accelerate its transition to a cleaner and more diversified portfolio of energy sources, products and service offerings, promoting higher energy efficiency and decarbonization. COVID-19 has created a perfect storm that, along with the ongoing and urgent need to reduce CO2 emissions in order to fight climate change, should persuade the industry to embrace transformation in faster and smarter ways. For many players, future survival and success depend not only on greater focus on renewable energy, but also turning the industry into a modern, energy-efficient business sector matched by a zeal for intelligent automation and digitalization of working processes.

All oil and gas industry segments – from field operations and services to refining, transport and distribution – have been affected by the COVID-19 slowdown. As already noted, some companies will not survive because their negative margins will inevitably lead to operational shutdowns and financial distress.

In the short term, companies need to focus on two core areas to gain the best-possible chance to weather the COVID-19 storm:

In the medium term, portfolio management and ongoing efficiency optimization are necessary but not sufficient on their own: only true transformation of their business models will ensure long-term viability for most industry players.

For almost every player, it is necessary to rethink objectives, geographic and business scope, and route to market. For companies focused solely on high-cost production assets, such as shale, tar sands and deep water, this may be a major challenge, and a significant proportion of these companies are likely to progressively shrink, collapse or be acquired. For companies already beginning to diversify their energy sources, now is the time to push harder in this direction and invest further in energy efficiency, decarbonization and renewables as such projects become more attractive because of lower technical, commercial and financial risks. There is also likely to be considerable consolidation across the sector as industry portfolios designed for one price point struggle to adjust to life in a new, much harsher environment. 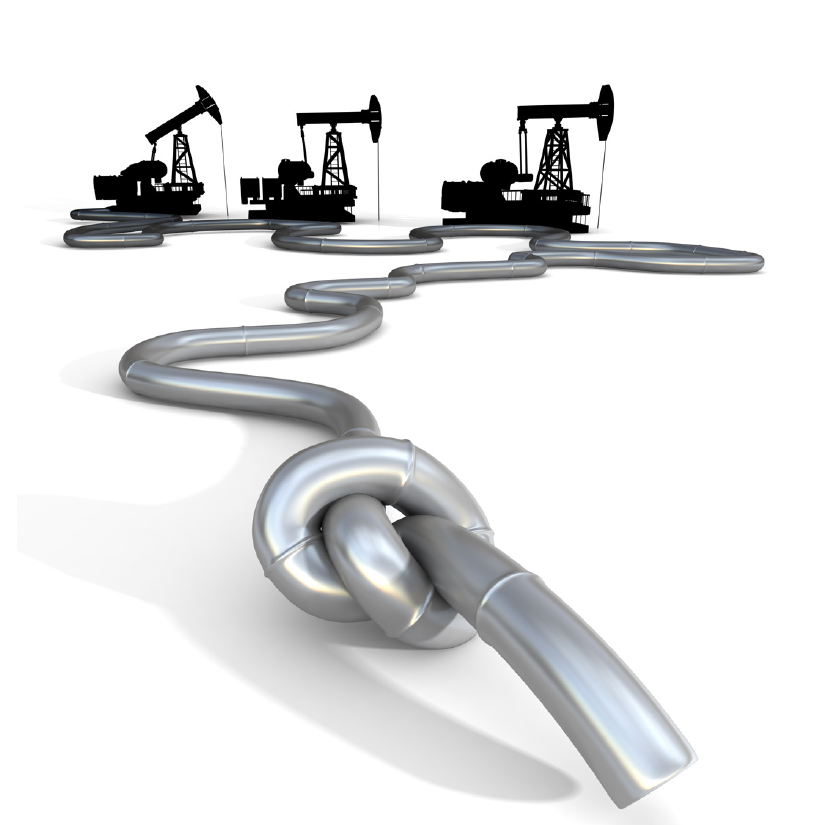 This report was written by: